What is it with old school death metal bands and their longevity? Case and point: Immolation.

Immolation has been around since the mid 1980s, beginning life as Rigor Mortis in 1986 and changing to their current name in 1988.

Since then, they’ve released 10 albums, the most recent being the acclaimed Atonement.

So, not only do they have longevity, but many of these old-school death metal bands match that longevity with quality. Immolation being a prime example.

Today, we’ll be looking at Atonement’s predecessor Kingdom of Conspiracy. 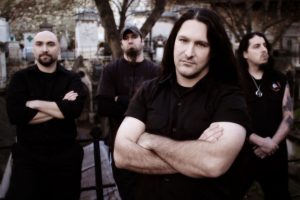 Released in 2013, the album met with very positive reviews. Upon a listen, one can hear why reviewers loved it — it’s utterly merciless death metal done well.

The lineup on Kingdom of Conspiracy are long-time members Ross Dolan on vocals and bass and Robert Vigna on guitars. Vigna is the sole remaining member from the band’s days as Rigor Mortis and Vigna has been there since Immolation became, well, Immolation.

They are joined by Bill Taylor ong guitar and Steve Shalaty on drums.

When you listen to this, you’re going to wonder how Shalaty doesn’t collapse from exhaustion on stage. His furious double bass drum is almost constant throughout the record, reaching ridiculous speeds. I don’t see how he maintains it live and I must assume he has the legs of a horse and the endurance of a mule.

Kingdom of Conspiracy as a whole can be summed up in one word: Blistering.

“Blistering” seems especially appropriate considering the name of the band is “Immolation.”

The title track, “Kingdom of Conspiracy” just blasts the listener with its double bass drums and riffs that change without a second’s notice. The guitar solos are fast and short, lasting just a few seconds before turning back to the aural assault Immolation is best known for.

“Kingdom of Conspiracy” pretty much sets the tone for the rest of the album, which is an unrelenting barrage of heaviness and speed, being driven by Shalaty’s double bass drumming and Taylor and Vigna’s guitar harmonies.

“Keep the Silence” is one of the strongest tracks on the first half of the album. For some reason, the drums sound deeper and heavier as they pound the listener. The song is like a meteorite, building up fire as it moves ahead until it just explodes.

“Echoes of Despair” finishes off the first half of the album with some of the most complex song writing before. With its tempo changes, guitar screeching and unrelenting heaviness, “Echoes of Despair” is instantly memorable. It’s one of the tracks on the “Kingdom of Conspiracy” that the listener will keep coming back to.

“Indoctrinate” is marked by its guitar solos, which are a throwback to the old days of death metal, which Immolation was, of course, a part of. Everything in this song rings back to what one remembers of the genre’s heyday and kind of shows that old school style is not dead yet. My favorite on the album and harkens back to the day I was a teenager, when death metal was a much-maligned and mysterious genre to many of us.

Following up “Indoctrinate” is “The Great Sleep,” another awesome track. It’s a nice contrast to the former song in that it relies more on the band’s harmony and tone to create its mood. It’s got that “umph!” to it that makes you want to bang your head no matter where you listen to it.

“Serving Divinity” is actually pretty groovy for a death metal song. It’s another example of Immolation being a band that’s not afraid to expand its songwriting repertoire. It’s also got some of the fastest blast beats on the album.

Now, there’s several songs that I didn’t mention. Don’t take that to mean that I don’t think they’re not good, they are. It’s just the songs I mentioned just stand a head above the rest and are simply what I consider the “must listens” from the album.

I don’t know what it was about 2013, but it seems like the old school death metal bands were releasing albums to show the younger kids how to do it. Suffocation, Carcass and Gorguts all released albums that year and each of them were met with positive responses.

Kingdom of Conspiracy is definitely worth checking out, even for people who generally don’t listen to death metal. It’s got some complex songwriting and great performances that are technical while still being able to stay raw.

I really like the album and recommend it to anyone that’s building a collection of death metal. Immolation shows that good death doesn’t die.

2 thoughts on “Retro-Review: ‘Kingdom of Conspiracy’ by Immolation”