Tad was one of those Seattle groups that got signed to a major label when grunge zeitgeist was going on.

I had been curious about them at the time, seeing they had been on listening lists for several metal writers I kept up with back at the time.

Alas, it was one of those situations where I simply couldn’t find their much ballyhooed album Inhaler. I couldn’t find it in Colombia House, BMG or my destination music store, Hastings. Over time, I forgot they ever existed.

Luckily, when I was looking for albums to review from 1993, Inhaler was amongst them. Thanks to YouTube, I got a chance to hear the album.

And I found it to be pretty good. The production is top notch and the band not only knows how to play their instruments, but they also know how to add their own personal touches to them. Combined, that makes a pretty memorable listening experience.

Tad was formed in 1988 by its namesake singer/guitarist Tad Doyle and were amongst the first groups to be signed to the legendary Sub Pop records. The following year they recorded their first album, God’s Balls.

Tad was signed to Giant Records, a label that fell under the Warner Bros. umbrella after they appeared in the movie Singles in 1991, which was the same year they released their second album, also on Sub Pop, 8-way Santa.

Anyway, on Oct. 18, 1993, Inhaler was released. Apparently, the expectations were pretty high, but unfortunately, it didn’t take off as hoped. It really had nothing to do with the quality of the album, but more to do with music outlets (I mean MTV and radio) and grunge fandom beginning to wane. 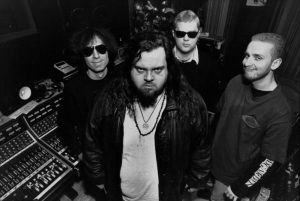 The lineup for Inhaler is, of course, Tad Doyle on vocals and guitar. Doyle doesn’t sound like your typical singer here, instead his style is somewhere between a shout and singing. At times, he has a bit of a growl to his voice. Doyle’s vocals, though, lend themselves well to the music and is one of the most identifiable aspects of the band.

Luckily, the rest of the band aren’t slouches either. Bassist Kurt Danielson is just awesome on this album as is drummer Josh Sinder. The two of them drive a lot of the songs forward and along with Doyle, give Tad a sound of their own.

It’s not to say that guitarist Gary Thorstensen is a slouch. He does his role well and has some impressive moments of his own, particularly when he gets to solo.

It’s pretty easy to say that Tad has that Seattle “grunge” sound. They don’t sound too unlike Mudhoney or early Soundgarden as far as their approach, which is pretty straight forward on the most part, with rhythm-driven songs and dirty sounding guitar melodies driving the songs.

That’s not to say they sound like other bands. It’s just the approach. Tad definitely sounds like Tad. They’re on the heavier end of the grunge spectrum and they’re not afraid to let the listener know it.

The thing is, Tad at their best moments on Inhaler just add that extra “UMPH” that makes them awesome.

“Grease Box” kicks things off in a rather kick-ass fashion with Danielson’s bass leading the way. When Sinder’s drums kick in, your really feel like your testosterone has gotten a boost and you’ve got to hold yourself back from just going with it and making a mosh pit out of your office or living room. The bass and drum rhythm are consistent through the song, like getting hit by a boxer’s jabs over and over. When the chorus kicks in, it’s like getting an uppercut. Just a great song to kick things off with.

Another standout is the heavy “Luminol.” This is another rhythm driven song where you hear Doyle wail during the chorus, adding a sort of chilling effect to the song. I mean that in a good way. Sinder’s continues his impressive drumming throughout it, even with the sudden back and forth tempo change from clean melodic guitar to dirty, heavy grunge guitar, which leads to a short and sweet guitar solo by, I assume, Thorstensen. Then this happens in another part of the song, just with a piano thrown in. It works really well and it’s one of my favorites on the album.

“Paregoric” is another one of those “I need to kick the crap out of something” tracks. It’s got a pretty straight-ahead rhythm that switches to a rather cool sounding, almost wailing, guitar pretty seamlessly around the almost gang shout chorus of “too late!” But, really, what makes this song is the breakdown with puts Danielson and Sinder front and center again with Thorstensen and Doyle creeping in, building up until the heavy rhythm takes over again.

“Paregoric” is just the beginning of a heavy run of songs. Following it is “Pansy,” an almost sludge-metal song. It’s not the fastest song on the album, but it’s pretty heavy nonetheless with Doyle belting out some growls. The guitars are tuned low and Danielson sounds like he’s beating the crap out of his drums. Add on the weird almost ethereal vocals toward the middle song and you’ve got something pretty cool.

Things close with the semi-acoustic “Gouge.” These sort of closing songs were almost mandatory back in the day and kind of cliche at this point. Despite that, “Gouge” is pretty good though. Doyle really sounds like he feels what he’s singing and the band still has fun with their instruments instead of pushing out something robotic, which a lot of these type of songs can feel like.

There’s some other pretty good tracks on here that don’t quite rise to the level of the must-listens I mentioned, but are worth giving a try because they aren’t filler. “Throat Locust” and “Ulcer” are pretty good standard grunge tracks, with Doyle really pushing his voice over a single sustained note in “Throat Locust.” The groovy “Lycanthrope” also fits into this category along with the very bass-guitar driven “Just Bought the Farm.”

When it comes to Inhaler, I think a lot of it is going to come down to whether you like grunge music or not. It may be a little bit of an unfair to say, but they are firmly planted in that Seattle sound. Not that it’s a bad thing, I thoroughly enjoy it, especially when bands really push the borders of that sound.

I think Tad is one of those bands that did push the boundaries of that sound. Nine of the 11 songs are definitely worth listening in my opinion. Not that the other two are bad, they just don’t have that extra something that makes them memorable.

Anyway, I think Inhaler is definitely worth checking out.